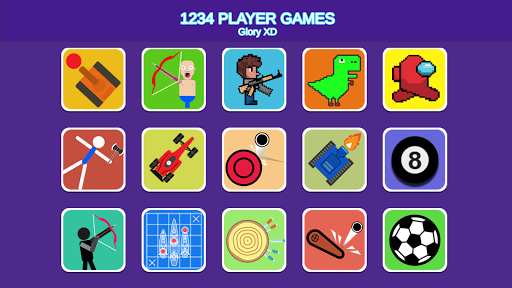 Download 1 2 3 4 Player Games : Stickman 2 Player latest version apk The 1234 player is a free minigame. The game is a collection of single-player/local multiplayer games. It includes games for 2 players, 3 players, or 4 players that you can play on one device (smartphone or tablet). The 234 players have very fun gameplay. You can play without internet / Wi-Fi because this game is offline and local multiplayer. The more people, the more fun, but if you have no one around to play this game with you, you can play the arcade games in single-player mode to train your skills. In a sense, the 2 3 4 player games can be called games for kids or games for boys.

— Mini Tank Game
Mini Tank classic is a board game (tank shooting game), battle tank, free offline arcade. You must control your tank, aim, and shoot to destroy the opponent to win. Some of the features of Tank classic: cool sounds, 2 player game.

— Sea Battle Classic
This warship game is one of our favorite board games from our childhood. You will have battleships and place them on the battle map and then launch attacks on the enemy’s naval fleet to win the battle. Some of the features: 2 players, addictive gameplay.

— Throw Knife Challenge
Throw the knives into the logs and find the winner. Some of the features: 2 player games, cool sound effects, fun gameplay.

— Car Drift and Race
This is a car racing game that you can play with 1234 players, realistic physics simulation. You must control the mini car and race to win. This is a game for kids.

— Archery Game
Stickman Archery Legend is a stickman game for 2 players. You will play as a legendary stickman bow master. You must control your stickman warrior to fight and win.

— Pinball
Pinball classic is a free mini-games, free arcade game that you can play with 2 3 4 players.

— Pool ( Billiards 8 Balls classic )
Challenge your friends with the addictive fun pool game. Pool 8 is a game for 2 players.

— Fun Bowman
You must control your archer, aim, and shoot to destroy the opponent. Let’s challenge the archery game to your friends now!

— Gun Games
This Gun game is a simple shooter game with fun control and fun sound effect. You will take a gun and shoot to destroy the opponent and win. The gun games can play with a maximum of 4 players.

— Dino Run Game
This is an offline dinosaur game, one of the best arcade games. You must run the Dino T-rex as far as you can to win.

— Imposter Run
This mini-game has endless running gameplay. You need to run and jump over obstacles to get the highest score, with the Imposter game you can play with 4 players.

Thank for playing the games!
Hope you enjoy it!
V3.3
– Add new games: ODDY_SOCCER & HUNGRY_SNAKE
V3.2
– Add new games: CUTE BIRD & CAT JUMP
– Fix errors
Attention!
1 2 3 4 Player Games : Stickman 2 Player is free to download. as defined in the Terms of Use and Privacy Policy. Besides, devices should have access to network as this is an online game.