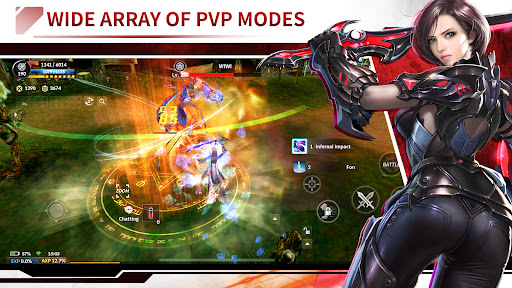 The description of Cabal M: Heroes of Nevareth App

Long ago, the almighty CABAL used their powers to build the world of Nevareth into a utopia.
This utopia never came to be as power was abused and constant fighting tore their land and their dreams with them. Only seven of the CABAL remain, including their leader, Faust.

Hoping for a brighter world, Faust used his remaining strength to see the future but only saw the near destruction of Nevareth once again. Now nearly a thousand years later, his vision came to pass and the cycle of extinction has begun. It is now up to you to face this threat and ensure the survival of Nevareth.

The legendary MMORPG is now on mobile! Cabal M brings the skill-based combat and many PvP modes of the PC version to the palm of your hand.

Choose from 8 Powerful Classes
Explore the world, and make your mark on the world of Nevareth as a Warrior, Blader, Wizard, Gladiator, Force Blader, Force Shielder, Force Archer, Force Gunner.

A World Divided: Capella vs Procyon
2 Rival nations make up the world of Nevareth, Capella and Procyon. Both emphasize the importance of growing their nations, they differ in one fundamental aspect. Capella strives for equal growth to all. While Procyon emphasizes developing a single most outstanding leader.

Which side will you choose?

Join the fight!
Conquer your enemies.

Be more than a hero.
Become a CABALHero.

Join the Cabal M community, Join our Official group
FB group: https://www.facebook.com/groups/playpark.cabal.m
Discord: https://discord.com/invite/g45bwaCe28
What’s new in this version:
• Bug fixes and performance improvement.
Attention!
Cabal M: Heroes of Nevareth is free to download. as defined in the Terms of Use and Privacy Policy. Besides, devices should have access to network as this is an online game.