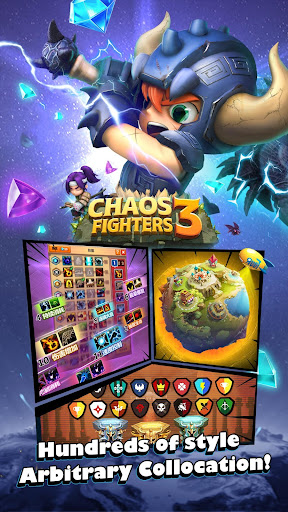 Download Chaos Fighters3 – Kungfu fighting latest version apk is a awesome game with ACG element. This game mode is placement RPG & Round battle.There are more than 40 kinds of effect brilliant skills and hundreds of exciting and fashionable characters. The game has real-time players in the PvE & PvP challenge, funny interaction with friends, The World Martial Arts, 3V3 Ranked Game and so on.
Fresh, Brain-Burning, Relaxed, Funny is our goals to bring the awesome gaming experience for players all over the world!!!

Hundreds of fighter with full personality, different attributes and talent, to meet all your ideas about role-playing!

More than 40 skills with different characteristics in 10 major skill tree can be matched with hundreds of combat style. Brainstorming, refuse brainless p-t-w games!

Real-time team Instance，Slave struggle，Food production co-ordinated efforts to speed up, excellent combat video sharing comment！Let’s play with your friend, do not get lonely

The world’s first martial arts congress, battle arena, underground chaotic arena and a series of PVP games provide you with a higher chance to compete with other fighters. The world champion adopts a fair competition mode, rejecting krypton gold and burning your brain!

In PVE, the game has a built-in offline hang-up system, 7*24 hours, even sleep time is upgrading, so that you can keep the fighter growing when you are too busy to go online!
1. New type of outfit!