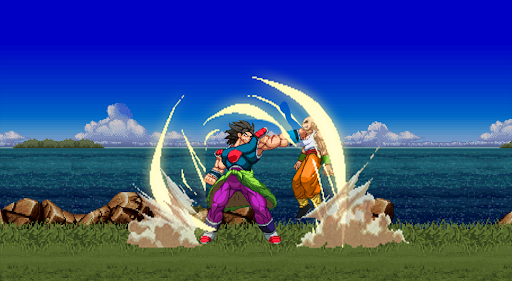 Download DBZ: Super Fighters Battle latest version apk you look for DBZ GAMES AKA Dragon Ball Z Super fighting game ? this is one of the best DRAGON BALL Z mobile games experiences that you might find available on Play store, the DBZ SUPER SAIYAN Z FIGHTERS With its Intuitive controls and simple summon-powers blast/attack gameplay, it comes out mixed with high quality 2D animation & visuals, enjoy playing as one of the super characters like goku, vegeta, frieza,piccolo, and many more WARRIORS AND Z FIGHTERS from DRAGON BALL Z AND SUPER , and transform to all Super Saiyan forms like super saiyan, super saiyan 3, and saiyan God, ssb, ultra instinct and other transformation from the DBZ anime battle , each form comes with its unique skills and abilities , such us: kamehameha, big bang attack, spirit bomb, combo attacks, and many other power of warriors in this DBZ GAME.
the game allows players to feel the fantastic simplitic refreshing approach to the anime action genre for them as their fans, yet with its addective gameplay. along with the VS mode battle and STORY MODE , there is also a training mode where you can even Train and Awaken DB your characters potentials to power them up and have high change to defeat your enemies.
be your hero and figth to win your levels to become the strongest Z fighter in this Dragon ball Z game.
BIG UPDATE :
– NEW CHARACTERS DESIGNS AND GRAPHICS
-ROLE PLAYING MODE
-1 VS 1 MODE
-TRAINING MODE
-TEAM MATCH MODE
-STORY MODE
-PLANETS DESTROYER MODE
-NEW ENEMIES AND BOSSES, AND THEIR UNIQUE SPECIAL POWERS
-GET BACK TO THE PREVIOUSE GRAPHIC STYLE
( fixed the crash/blocage)
Attention!
DBZ: Super Fighters Battle is free to download. as defined in the Terms of Use and Privacy Policy. Besides, devices should have access to network as this is an online game.