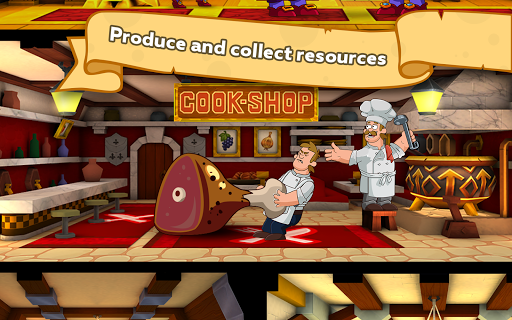 Become the lord and master of a real medieval castle! Players, get ready – medieval fantasy RPG begins right now! Accept new dwellers, assign them to their duties and upgrade your RPG kingdom!

Embark on a thrilling RPG adventure – here are some of the opportunities you get in the roleplay game:

– Plunge into story-driven RPG campaign! Fight orcs, giants, skeletons and even dragons in hundreds of missions! Battle magic, cold steel and cunning roleplaying strategy!
– Build your own castle! Build new rooms for your stronghold and upgrade the existing ones. You’ve got all you need to create a dream castle! Begin the castle base-building now!
– Train your villagers! Each of your dwellers can learn new skills and wear any equipment. Enjoy the Medieval Fantasy RPG, train great warriors and scribes… and then swap them with each other!
– Co-op: Play with a friend or random player and go in search of treasure in mysterious dungeons
– Enjoy Multiplayer in the mobile game. Get medieval! Burn and plunder the kingdom of someone you don’t like… And you don’t like all of them, right?

Upgrade your characters, become wealthy and influential. Build a dating room and watch your dwellers have children who’ll soon grow up and serve your kingdom too. The medieval RPG mobile game awaits!

Brought to you by MY.GAMES
A grand Hustle Castle event is coming soon! Get ready for the Great Knightly Challenge with a huge variety of unique rewards.
– Gem upgrade functionality improved
– Players can exit neighborhoods in the Clan Territory at will
– Changes to gem chests in the castle store
– The ability to link My.Games accounts
Find out about all the details in-game.
Attention!
Hustle Castle: Kingdom games & Medieval Tycoon RPG is free to download. as defined in the Terms of Use and Privacy Policy. Besides, devices should have access to network as this is an online game.