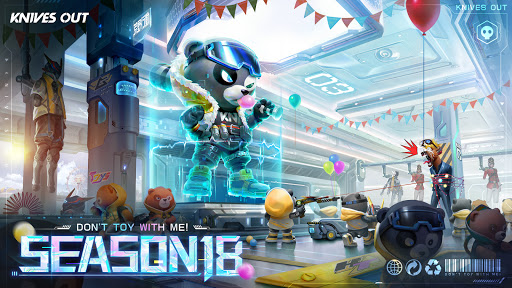 【Violent confrontation, Fierce battle!】
Collide fiercely with enemies’ vehicles! Survival is only in one moment!

【Creative and Fresh leisure gameplay!】
Sniper Battle, 50V50, Team Fight… A lot of creative leisure games are constantly updated, and you can find the most suitable one!
S18 Toy Invasion Event
1. Park Mayhem has been invaded by toy soldiers! The toy soldiers have occupied various parts of Park Mayhem. Defeat them to get memory chips.
2. There are many clues to be found in the Park Mayhem map. Investigate to find memory chips and uncover the truth behind the invasion.
3. A mysterious merchant will appear in Park Mayhem. Use the mini-map to find the mysterious merchant and use memory chips to purchase battle supplies.
Attention!
Knives Out-No rules, just fight! is free to download. as defined in the Terms of Use and Privacy Policy. Besides, devices should have access to network as this is an online game.