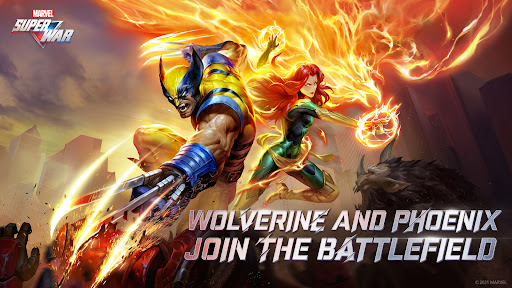 Download MARVEL Super War latest version apk Marvel and NetEase Games have teamed up to deliver the most dynamic, eye-popping and faithful recreation of the Marvel Universe on the mobile screen. Get ready to explore more possibilities and experience the action like never before!
Iron Man vs. Captain Marvel, Spider-Man vs. Deadpool, X-Men vs. Avengers! Epic 5v5 real-time super battles are about to shake the vast cosmos!
What are you waiting for? Grab your friends, form your ultimate squad and explore into the new and unknown Marvel MOBA-verse.
Come and Fight As A Super Hero!

[Game Features]
—-Venom crashes into the battlefield!
After bonding with an unearthly symbiote, the journalist Eddie Brock received alien powers and amazing strength by being transformed into the monstrous Venom! This deadly combination is prepared to tear through enemies on the Wakanda!

—-Take to the Battlefield in Combat!
5v5 real-time super battles in Wakanda battlefield are about to shake the vast cosmos! With rich jungle resources and a dynamic map, win team battles by creating your own unique strategies, and through teamwork!

—-Fair and Balanced Combat
No pay-to-win rune system! Balanced heroes mean balanced combat. Reputation and achievements must be earned through skill and perseverance. Enjoy the thrill of besting your opponents in fully fair fights.

—-Fight As A Super Hero！
The stage is yours! Play as your favorite character and show your strength with special attack combinations, dynamic effect and movement abilities. Create your own highlights on the battlefield!

New Heroes
The new heroes, Wolverine and Phoenix, have joined the fight!

New Event
The Great Gathering of Heroes event has begun!

Optimization and Adjustments
1. Fixed an issue where some users got stuck at the loading screen for a long time after logging in and could not enter the game.
2. Fixed an issue where black color-blocks occasionally appeared in-game.
Attention!
MARVEL Super War is free to download. as defined in the Terms of Use and Privacy Policy. Besides, devices should have access to network as this is an online game.