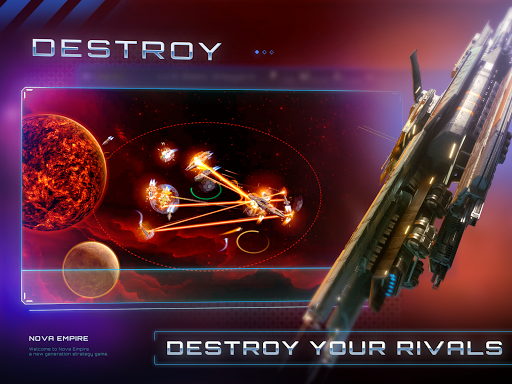 Download Nova Empire: Space Commander Battles in Galaxy War latest version apk Build up a Space Empire and establish control of the Galaxy and the Universe! Nova Empire is a multiplayer space game in which the aim is to build your empire and conquer the galaxy in epic space battles against your rivals with other allies worldwide! To achieve domination of the galaxy, you will immerse yourself in action-packed space battles, define your space strategy, forge alliances among other players, and use a space base & spaceship builder to develop your space station and dominate the universe. Find out why this is one of the most thrilling and exciting sci fi spaceship games!

Challenge other players worldwide in epic Interstellar Battles
Develop your strategy to establish space domination! Command space and conquer other commanders in one of the most engaging strategy games. Fight in intense universe PvP battles against hostile commander’s spaceships. Your skills as a commander will be tested vigorously in a battle for control of the galaxy!

Decide your strategy and conquer the galaxy
Design a space strategy capable of dominating enemy alliances and controlling the galaxy! Decide early on how to manage your resources in this universe (energy, minerals, crystals and alloy). Create a fleet strategy with your allies, whether you want to prepare for an all-out attack with dreadnoughts or an agile attack fleet of light cruisers, the decision is yours. Recruit admirals from your academy and guide your fleets to victory!

Create Alliances – Team up with other commanders
In this sci fi multiplayer space game you can forge alliances from across the galaxy. Control entire galaxy sectors in the universe and fight alongside allies versus your rivals with a planned space strategy! Join legions and help your fellow commanders acquire weaponry, construct a space station, and acquire resources faster. Help your allies! Count on your fellow commanders to defend from outside attacks and to plan raids in other space battles, join forces with your allies to defeat your rivals!

New Features & Special Events!
Your user experience is very important to us. Regular updates and new elements are waiting for you to take command of a star fleet in this universe! Nova Empire: Space Commander’s story evolves week by week filling your desire for new content! New events held regularly for you to dominate the galaxy solo or in an alliance.

SUPPORT
Email us at [email protected]