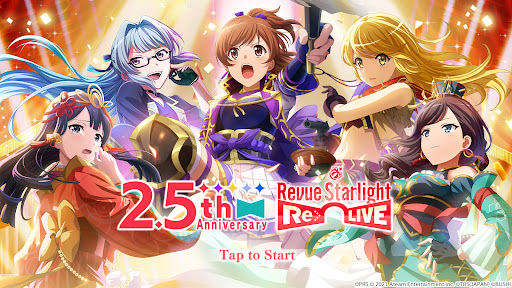 The description of Revue Starlight Re LIVE App

A direct continuation of hit anime Revue Starlight, the story of the game picks up right where the anime leaves off, but you don’t need to be a fan to enjoy all the excitement and drama that await in this RPG!

★ Original Story that Continues the Saga of the Anime
In addition to all your favorites from the anime, there are also tons of brand new characters making their first appearances!

★ Deep Battle System with Optional Auto Mode
Using the skills of each of your Stage Girls effectively in battle will have you itching to get back into the fight. But if you just want to relax, put battles in auto mode so you can keep the momentum going!

★ Multitude of Character Growth Aspects Will Keep You Coming Back
With numerous ways to raise your characters and unique stories for each that unlock as you power them up, you’ll be coming back to spend time with your favorites again and again to get to know them even more.

★ Stunning Visuals and Music
Battles are rendered with beautiful 3D graphics and each Stage Girl’s special skills are just as dramatic and stunning as you would expect with unique animations for each. Stories are also brought to life with impressive Live2D, and numerous songs from the anime appear with tons more on the way in future updates!

★ Fully Voiced by a Superb Japanese Voice Cast
The cast of the anime voicing their respective characters in addition to new voice talent will let anime fans fully immerse themselves into the world of Revue Starlight.

[Supported OS/Devices]
Android 5.0 and up

* We are unable to support or compensate for use on OS or devices outside of those that are officially supported.

* A Wi-Fi connection is recommended for the optimal Revue Starlight Re LIVE experience.

* Before playing Revue Starlight Re LIVE please read the End User License Agreement, which can be accessed from the in-game menu.

*Please see below for some common issues and potential solutions.
– Only a Black Screen Is Displayed and the Game Can’t Be Played
You may be using an incompatible device.
– Unable to Use Google Authentication on AteamID
Please use another account to back up/transfer your data on AteamID.
– The Game Is in a Language I Don’t Understand
Please follow the below steps after completing the tutorial.
English: Home > Other > Change Language
Chinese: [主畫面]＞[其他]＞[語言切換]
Korean: [홈]＞[기타]＞[언어 변경]
– Icon changed
Attention!
Revue Starlight Re LIVE is free to download. as defined in the Terms of Use and Privacy Policy. Besides, devices should have access to network as this is an online game.