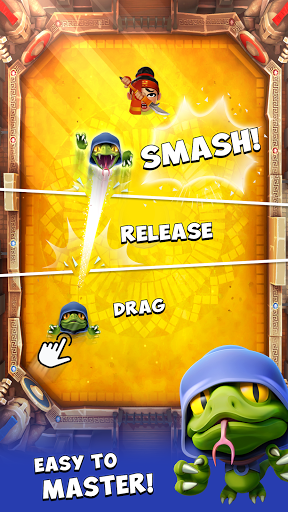 The description of Smashing Four App

Download Smashing Four latest version apk Enter the Arena and get ready to fight fierce 1v1 real-time battles against players from around the world! Experience unique gameplay and an original take on pool physics with this card-collectible PvP strategy game where every smash counts!

Win battles, gain trophies, collect rewards & cards to unlock your heroes’ powerful abilities that will turn the arena upside down and smash your enemy to pieces. Join a clan, meet other Smashers and support each other on your way to the top of the ranks. Rule the world of Smashing Four together!

Prove your skill in 1v1 PvP! Execute your strategy in different arenas! Smash your way to the victory!

Have a smashing time!

GAME FEATURES
PvP, real-time, turn-based, card-collectible strategy
Duel players from all around the world in challenging arenas
Win battles to earn rewards
Collect cards to unlock new heroes & upgrade them to unleash their unique abilities
Smash your opponents in the arena and fight your way up to the top of the ranks
Get all heroes available & get ready for new arrivals
Fight in the challenging environments of 10 game-changing Arenas
Create your own Clan or join an existing one
Share cards, chat and challenge your clanmates in friendly battles

Be the first to know about the latest news regarding Smashing Four’s development
Learn in detail about the latest and upcoming updates, bug fixes and balance changes
Discuss strategies and get some tips & tricks from more experienced players
Share your thoughts and suggestions with the Smashing Four team & get a response
Enjoy discussing your ideas and experiences with other players
Have fun with player-made content such as awesome gameplay videos or fan art
Find new friends, clans, and socialize with other players

A network connection is required.

Smashing Four is a free to play game and as such it doesn’t require you to spend any money to fully enjoy. However, it is possible to buy game currency or special offers using real money via in-app purchases. Currency can be used to acquire products such as Coins, Hero cards or Orbs that may help you progress faster. This does not ensure victories in battles. We do not support ‘pay to win’ mechanics.
– Various bug fixes and improvements
Attention!
Smashing Four is free to download. as defined in the Terms of Use and Privacy Policy. Besides, devices should have access to network as this is an online game.